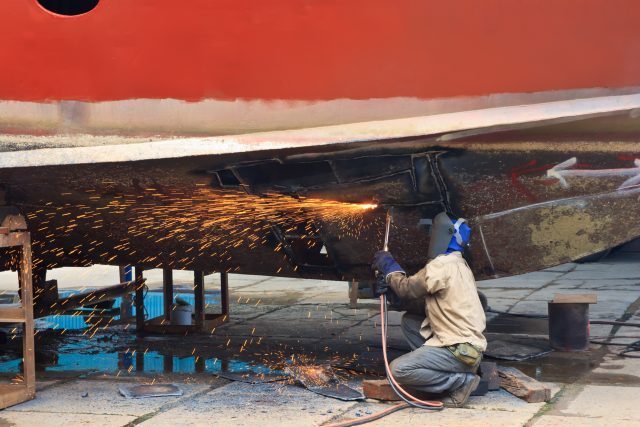 The COVID-19 pandemic has threatened to sink countless American businesses during the ongoing recession. And an array of family-friendly outdoor recreational events have been canceled or curtailed.

But counterintuitively, Florida’s East Coast boat builders are enjoying a pandemic production boom. Key example: Sea Ray’s flagship 39-foot SLX 400, which is built on Merritt Island — with a base price of $613,000.

“We went from getting ready for a terrible recession to realizing, ‘Uh oh, we’re way behind the 8-ball here.’ We’ve got to hire a lot of people because we have absolutely unprecedented demand,” Boston Whaler President Nick Stickler said, looking back on 2020.

“We have some of our boat models that if you want to order one, you’re into the 2022 calendar year to get one. So it’s been quite a ride,” Stickler said.

“2020 was an extraordinary year for new powerboat sales as more Americans took to the water to escape pandemic stress and enjoy the outdoors safely,” NMMA President Frank Hugelmeyer said in a press release.

“For the first time in more than a decade, we saw an increase in first-time boat buyers, who helped spur growth of versatile, smaller boats — less than 26 feet — that are often towed to local waterways and provide a variety of boating experiences, from fishing to watersports,” Hugelmeyer said.

Boating and fishing is a $3.3 billion business in Florida, leading the nation and topping No. 2 California and No. 3 Texas, the Bureau of Economic Analysis reported in November.

Hiring is brisk at the Brunswick Integrated Manufacturing Center on Sykes Creek on Merritt Island, which encompasses 216,000 square feet of floor space.

“(From) Q2 till the end of the year, we just saw a very, very steady growth. And we really needed to even further accelerate our plans and are hiring more than we even had anticipated,” Gowan said.

“We plan to hire around another 100 people this year,” he said.

Headquartered in Edgewater, Boston Whaler builds sportfishing boats, pleasure boats and yacht tenders. Stickler said the Edgewater campus employed about 800 people at the dawn of 2020 — and his workforce has now swelled just shy of 1,200. He anticipates hiring roughly 150 more people this year.